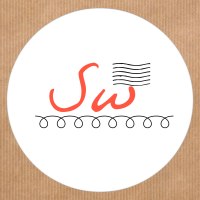 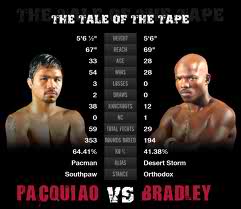 Tale of the Tape

Pinoy Pride Pacquiao Loses, Bradley Wins: my Thoughts about it?

I was one of those flabbergasted viewers in todays boxing match between Manny Pacman Pacquiao and Timothy Bradley. Everybody is shock, mouth opened. It was unbelievable, All the while I thought Manny Pacquiao will again bring another win for the country but as shocking as it is, the result favored to his opponent Bradley.

Landing into a split decision and declaring Timothy Bradley as the new Boxing Champion.

I would not deny the fact that I am an avid fan of Manny Pacquiao in the field of boxing. I am really disappointed with how the game went on specially that all through out the game I know that Manny won the round. But Boxing as any other game do only have one sole winner and a loser of course, and if the Judges think that the score was really meant for Bradley then Let’s just be sport and accept the defeat. However the Pride of all Filipinos still remain when Manny Pacquiao made all his effort to win the match. END_OF_DOCUMENT_TOKEN_TO_BE_REPLACED

Game Over! (She Write’s on Pacquiao-Marquez III)

Contrary to my last post, I have written this entry in obedience with what my mind and my heart dictates me.

Maybe you are one of the hundreds of people who had watched the much awaited trilogy fight against Pacquiao and Marquez in the boxing Arena held at Las Vegas, Nevada. Whether you watched it Live at Mandalay Bay or watched it via pay per view, movie theathers or even the Late telecast on Tv, I bet you all have a game conclusion regarding the the fight, ofcourse so do I and which I wanted to share herein.

As a Filipino, ofcourse I am on Pacquiao’s side. I certainly believe in his skill and ability in the boxing ring. He is no doubt deserving to be called as the Pound for Pound Boxing Champion. His legacy in making 8 wins in a straight fight is definitely remarkable in the boxing history which had break all the record, his fights against Cotto, Morales, Hatton, Mosley and Margarito proves that Pacman’s strength, powerful punches, terrible knockouts and undeniable speed made him win the titles unquestionably, and what makes me more proud about him is that the so-called Boxing champion, the Mexecutioner, the No. 1 fighter, Manny Pacman Pacquiao is a Filipino like me and like you if your a Filipino too.

On the other hand, Marquez I think is a good fighter too, I don’t know much about his game records but I had watched his two last fights with Pacquiao and I say that he can definitely match Pacquiao’s game. He do not only play physically but mentally as well, and as I saw him play yesterday, he had definitely improve a lot. I guess he prepared for it and I also guess that he really want to win badly.

Going back to history, Pacquiao and Marquez first fight was last 2004, which end up into a draw. Marquez with a heavy heart insisted that he won the match and then asked for a rematch. 2008, when the 2nd fight was held, that was one of the best fights ever, Pacquiao almost knockout Marquez, thus, resulting to Pacquiao’s victory. This made Marquez real mad, he can’t accept his defeat and so he wanted to proved himself once more, the result, was yesterday’s fight.

Pacquiao-Morales III, twelve rounds of non-stop action, ending up to majority decision proclaming Pacquiao as still the undeafeated boxing champ. I personally watched the fight, Marquez was undeniably aggresive, beating Pacman with his hooks and jobs. He did made counter punches everytime Pacman leaves him one. He gave so many punches however because of Pacman’s speed not all of his shots were counted. At the end of the game, Marquez raised his hand in halo that he won.

Though Marquez showed extreme aggresiveness, Our champion did not showed any fear. Some say, he did not gave his best but for me, he was at his best.. He fought not only with his bare hands but with his mind. He stayed with his gameplan until the game reached it’s end.

The fight was a lil controversial. After the announcement, some Mexican’s booed Pacquiao infront of our flag. It is similar to booing us Filipinos. Sour grapers. Sore Losers.

Pacquiao’s victory is unquestionable. If some thinks he does not deserved it, its your point of view, hence we do not have the right to question the judges decision. If Juan Manuel Marquez says that he knew he would not win if the game will end in 12 rounds, then why didnt he knock out Pacquiao? Why?because he simply cant.